I was recently contacted by a representative of Nooka http://www.nooka.com/ about a new nomenclature that their founder Matthew Waldman has devised. Having seen how cool his watches looked, I thought I would have a read through the materials they sent me, and delve into their new linguistic setup for the number system.

I have been sent images that contain the linguistic and representational systems for counting in both decimal (base-10) and duodecimal (base-12). Below is a discussion of each.

The image here shows the decimal system representation of the Nooka system. 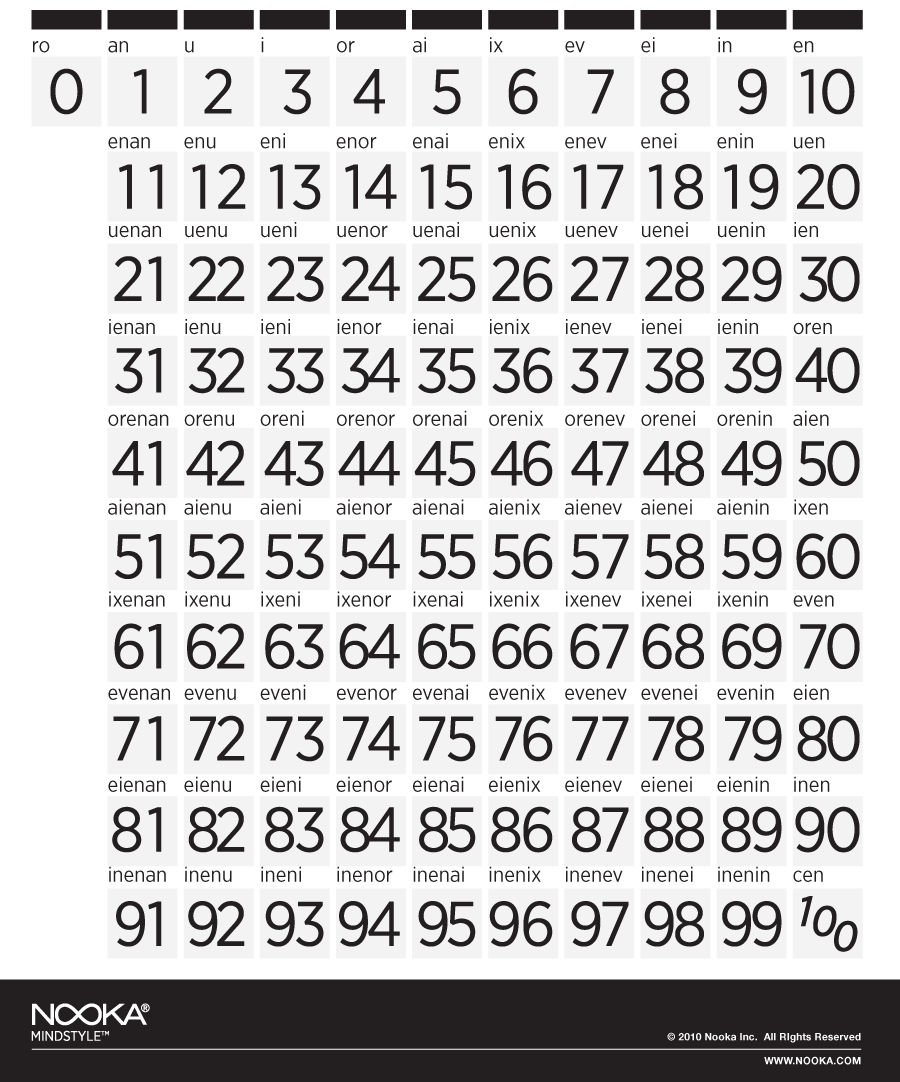 Notice that the same numerals are used to represent the numbers as in the “normal” decimal system; it is merely the linguistic terms that have altered. The system is very similar to many eastern systems (my knowledge of Mandarin Chinese informs me that it is very similar to Mandarin) in that to say a number you merely say the value of each column and the type of unit in it. For example, 42 is “forty-two” in English but “orenu” in Nooka decimal, which means four-ten-two. This is a far more logical and systematic system of counting and representing numbers linguistically than English as it describes exactly what the number is for you. It makes no difference to most mathematics as any sufficiently advanced mathematics (i.e. most of the field of mathematics) is algebra. However, when trying to teach a child how to do simple addition, they are told to put the number in to columns of tens and units and add up the values down the columns.

When trying to explain to an English child how to do this, you are often met with the idea of “fifty is five tens” being difficult for them to grasp as they have just learnt the term “fifty” parrot fashion as the number after 49 (i.e. the next value when you add one to nine in this case). A child having been taught Nooka (or Mandarin for example) would find this much easier to grasp as a concept. It is more natural to them to think of what a number actually is.

Another key feature here is the amount that you require to learn before you can proficiently count in a system. In Nooka’s decimal system you are required to learn 12 words and a simple rule in order to count to 999 (11 words and the same rule to count to 99). To count to 999 in English you need to learn 29 words, and there is no simple rule to describe where they come in order. This may not sound too bad, but consider the following. When a child learns to count, they will most likely learn the numbers 1 to 20 first. This requires the learning of 10 words and a rule in Nooka and 20 words in English. It doesn’t take a lot of thought to come to the conclusion that this has to be an easier way of learning the number system.

Honestly I am a fan of the linguistic setup of the Nooka system as I think it is a far more logical structure to naming than the existing systems. In my limited psychological opinion I think using a counting system with such a setup would likely improve the take up of mathematical concepts by children, however how we could test this is a different question entirely.

Below is an image showing the Nooka duodecimal system (base-12) and we can notice that there is a new visual representation for the numbers. 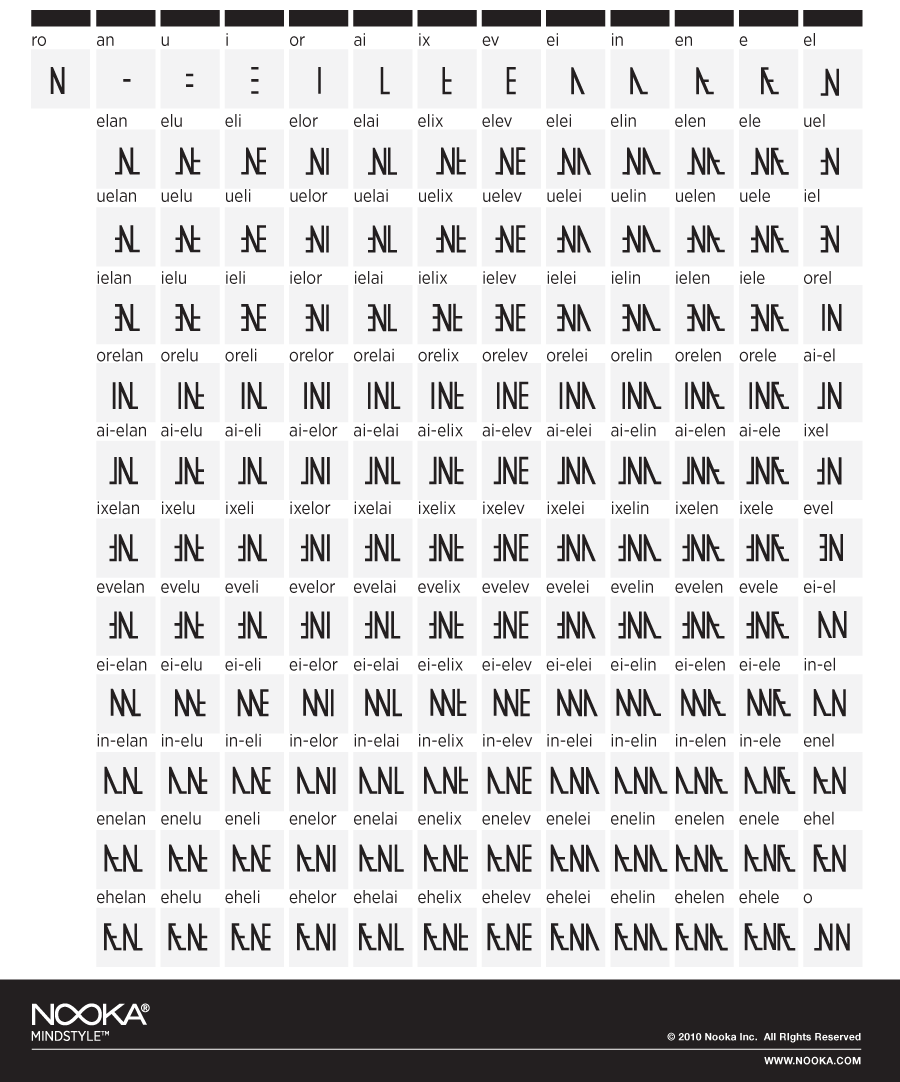 I want to start this discussion by saying that there are many mathematicians (myself included) who believe that counting base-12 would be much easier mathematically than counting base-10. It is fairly obvious as to why we count in base 10 (hint: look at your hands!). The reasoning behind base-12 instead of base-10 comes down to the number of factors of the base. The factors of 10 are 1, 2, 5, and 10 whereas the factors of 12 are 1, 2, 3, 4, 6 and 12. We count angles in multiples of 12 (360 degrees in a circle for example) as well as measure the passage of time and it is therefore a better system to use. If only we had been born with an extra finger on each hand we would be using a (slightly) more powerful number base as our default.

The naming for the Nooka duodecimal system is only slightly different from the decimal system, with the addition of “e” and “el” for 11 and 12. This is an improvement over the standard base-12 where the numbers 10 and 11 agree instead labelled A and B and 10 is used for 12 (to ensure that the system can be used for values greater than 12). Similarly to the Nooka decimal linguistic structure, this is very easy to use and makes systematic sense.

When it comes to the visual representation of the values, the Nooka system is runic although follows a logical pattern of adding markers to your number to display what number you have. The issue with this system however, is not that doing simple maths is hard, far from it, doing basic addition or subtraction would be easy using this representation, although one would have to learn some rules to be able to multiply and divide. The issue is the number of symbols used to represent some of the numbers. For example “orelor” which is only on the fifth row is already required to have 3 symbols, yet this is not a sufficiently high enough number to warrant this complexity. In standard duodecimal, the use of the 12 alphanumeric symbols implies that 143 in decimal is written as BB in standard duodecimal but requires 3 characters in Nooka’s system. Seemingly then trying to write a larger number like 353 in decimal goes from being 255 in standard duodecimal to a series of more than 3 characters in Nooka making it very hard to distinguish placement (I made an attempt and retrieved a 5 symbol number for this).

Both the Nooka systems are an interesting premise, to provide a universal linguistic system (and graphical representation) of the numbers in 2 different bases. The linguistic setup for the decimal system is I believe a very good idea. The logical structure provided would aid and improve the grasping of mathematical concepts by those learning it, whilst at the same time retaining the use of the standard graphical representation used worldwide.

The duodecimal system itself I believe has real promise but is unlikely to ever be used as the default due to our 10 fingers and 10 toes. As for the Nooka duodecimal system, I find the use of the runic symbols cumbersome in anything more than basic addition and this would lead to in actuality a restriction in the usage of what is a far more flexible counting system.

In closing, The Nooka systems are interesting, and the linguistic setup of the decimal system is for me a winning idea, but the big question is, why would I use that instead of something like Mandarin (or a tweaked version of Mandarin) which has already got an extremely large number of users?

Personal note, I am very grateful to the people of Nooka, Jon Patterson who contacted me and Matthew Waldman who designed the system for contacting me and asking me to look into their work. I would gladly help them in the future and found this to be a most enjoyable and interesting bit of side research.